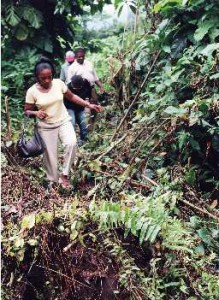 Article by
SGT. CHRISTOPHER A. GARIBAY
Petty Officer 2nd Class Delphine On, a trooper with Joint Task Force Joint Medical Group, sits by the Morale, Wellness & Recreation Library awaiting her next task for the day, volunteering at the Thrift Store. On’s story is incredibly unique, one that includes a life born in Cameroon, a childhood in Europe, and an adult life in the U.S. Add the establishment of a non-governmental organization and service in the U.S. Navy and you begin to uncover pieces of the journey she has taken.
She earned a law degree from the University de Nanterre Paris X and later, earned a law degree from American University in Washington, D.C. In 2002, she put her knowledge into practice. She opened the nonprofit African Aid Organization, Inc. with her husband.
"I’ve always wanted to work in international law," said On. "Even though I wasn’t raised in Cameroon, I still see myself in those girls. You see so many of them getting married at a young age or contracting AIDS through sexual [coercion]. I wanted to do more."
African Aid Organization, Inc. is referenced as AFAID, and is a non-profit organization devoted to providing first-class assistance, support, and education to the most vulnerable children in Sub-Saharan Africa, according to the organization’s website. They assist in HIV testing and prevention, education and poverty reduction. "We work in small villages in Cameroon, Mali, Burkina Faso and are looking to expand into Uganda," said On. "In the past 14 years, we have assisted 3,000 people ages 10 to 24. I care so much about this cause. I’ve put in my own money to fund our organization when donations were low."
AFAID has earned accreditation from the United Nations, which has afforded it opportunities to continue its work into the small villages they seek to serve. On wishes she could do more. It is a vicious cycle when little girls cannot afford to eat and they are forced into prostitution or into marriages with older men, simply for the opportunity to provide for their family, she explained.
On also serves as a member of the U.S. Navy Reserves. "I want to be an officer," she said. "Originally, I couldn’t be an officer because I wasn’t a U.S. citizen. I enlisted myself in the Navy with the intent on one day making the transition into be an officer. It’s been a long journey, but I just put in my packet for consideration to the board." On joined the Navy Reserves in 2008 and enlisted as a corpsman."I didn’t even know what a corpsman was when I joined," she said. "Being in the medical field has still allowed me to help people. I help people at the JTC (Joint Troop Clinic), screening, assisting those who come into the clinic. I’ve always wanted to challenge myself and embrace the country that opened opportunities for me."
Sailors who have grown with her along her military career and can attest to her character.
"I have known [Petty Officer 2nd Class] since April 2015, when we met at Navy Mobilization Processing Site, Norfolk," said Petty Officer 1st Class Richard Schreck, patient’s relations representative at the JTC. "[At the time], she was an enthusiastic [Petty Officer 3rd Class] at the time looking a bit new to the deployment phase of the Navy. I was able to speak with her and found out she finished her masters in law and was studying for her bar exam. My time with [On], I have had the privilege and honor to see her blossom into a well-rounded Sailor and put on [Petty Officer 2nd Class] over the last five months." Her role at JTF GTMO has been to treat Troopers at the JTC seeking medical attention. While she initially struggled to master her new job, she has become one of the best. "[She] took charge with no hesitation and is one of the top screeners for the clinic now," said Schreck. "Her motivation and dedication to the clinic and the well-being of all service members has been explicable."